In 2012, when the Raspberry Pi was just hitting the shops, and everyone and his dog wanted to know how to use it to get kids into code, Rob Cruse, Paul Kingett and I volunteered to help Computing at School (CAS) to produce the first Raspberry Pi manual for education.

What we wanted to do was to work with the teachers, lecturers and enthusiasts from CAS to create something that drew on their experience of how best to teach programming that would be a cut above the standard school hand-out.

One of the most interesting things about the project was it being open source. I went into it expecting to learn a lot about the Raspberry Pi, and about teaching. It 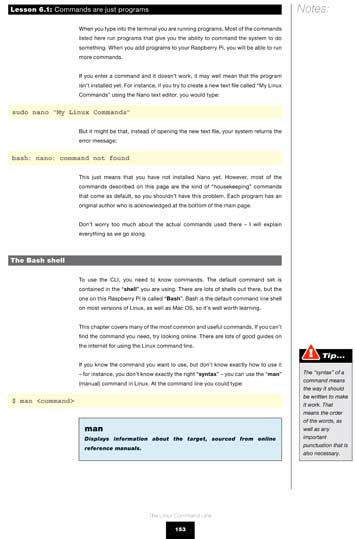 turned out, I also had something to learn about writing — or editing — for children; or more specifically, for children in a classroom setting.

A lot of my assumptions about the importance of completeness in instructions were, CAS members explained, wrong for younger kids. ‘It will just bore them. Give them the screenshots with minimal text and let them work it out.’

Based on this feedback, we revised some of the sections we’d edited: taking out some of the details, annotating where appropriate, and adding ‘top tips’ in the sidebar where we thought there was information that the reader simply couldn’t do without.

Lost in the command line

One of the best bits of working on the Raspberry Pi manual, was being the guinea pig for all the lessons and activities. We didn’t have access to a Raspberry Pi at the time (not for lack of trying), so we did all our checking in Ubuntu, on the assumption that the final Raspberry Pi OS would probably be a fork of Debian (as it turned out to be).

I checked the sections on Scratch and the Linux command line. Rob did Greenfoot and GeoGebra. The Python related content we split between us. At the same time, I was copywriting and editing other people’s work, Rob was subbing and doing production, and PK was working on the design.

The project was hard work but tremendously good fun, and something I was proud to do. The manual is still part of the Raspberry Pi canon today. You can download it from the CAS website.